This is an English translation of an original article by Eran Kaminsky (XNet). Since this article was published,
Arega’s story has taken an exciting new turn, we took the liberty to bring the story up to date.

An entire country was thrilled to see him hugging his father, who came from Ethiopia for a ceremony at the President’s house, but Hanoch Arega’s path to success was fraught with crises – and he remembers them all.

How did a young man born in Ethiopia, who until two years ago barely knew a word of Hebrew and resided in Israel illegally, get a job as a programmer in the IDF’s prestigious computer unit? If you ask 25-year-old Hanoch Arega, the answer is very simple – something like: “I wanted, I dreamed, so I made it happen.”

Yet, his story, is by no means a simple one, featuring not only desire, aspiration, and action, but also tenacity, ambition and optimism, virtues he brought with him to the President’s House in Jerusalem on the last Independence Day, where he was celebrated as an outstanding soldier. Arega currently translates programming videos into Amharic, and many young people from the Ethiopian community follow the training materials he uploads to YouTube; they learn from him, admire him, see him as a role model, a symbol of perfect absorption.

I felt they did not want me here

Arega was born and raised in Addis Ababa, in a home where Judaism was not a significant factor, but in which a yearning to reach Jerusalem always existed. “Life in Addis Ababa is completely different from that in Israel,” he says. “Everything is different, but it’s a very developed city. I’m always surprised by people’s reactions when I show them pictures from there. People here know almost nothing about Ethiopia. For example, when I say hot, they answer me, ‘What’s hot for you? You came from Africa.’ They do not know that the highest temperature in Addis Ababa is 25 degrees.

In his youth his parents divorced; his mother immigrated to Israel, and his father remarried and built a new family. Seven years ago, Hanoch and his younger brother, who currently serves in the Kfir Brigade, decided to leave Ethiopia and immigrate to Israel. The two chose not to wait for aliyah approval, but to arrive with a tourist visa, and from there started the road to receiving their blue ID card. “It is clear to every Jew in Ethiopia that Israel is the place where he should live,” says Arega. “I dreamed of getting to Jerusalem and I was sure things would work out in the best way. Then I realized it was a little more complicated. When I got here, my idyll shattered. It was very difficult, and I was not prepared for that.” 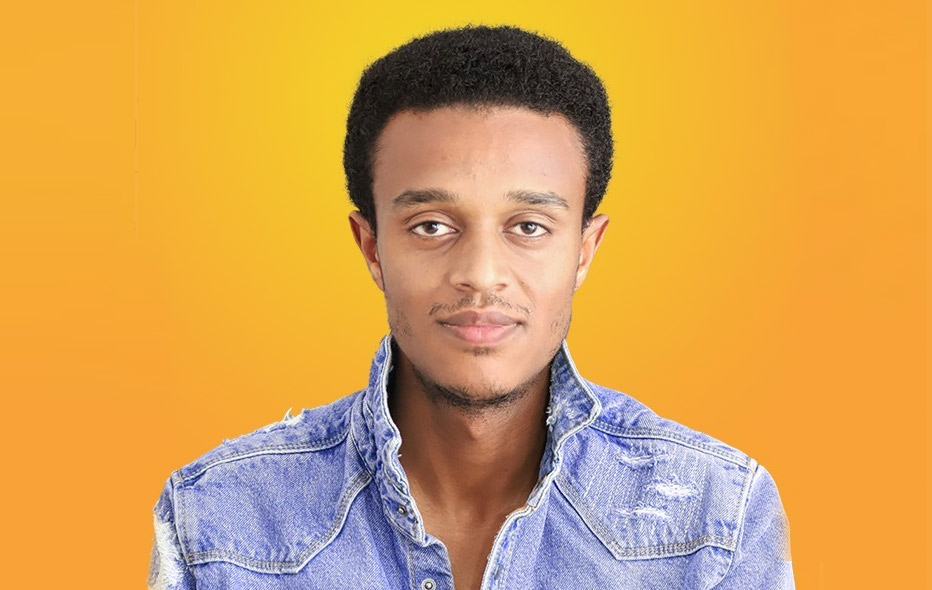 What was most difficult?

“I came to my mother in Be’er Sheva, and only after a few months was I able to travel to visit Jerusalem. I felt like it was the first day in Israel, but it was not as I expected. Maybe it was my childhood, but I imagined Jerusalem as a spiritual place, not as a city where people shout. It was not what I imagined. After three months my visa expired, I was here illegally, and it started to get difficult. It took four years of bureaucracy until my status was worked out. On the way I had many thoughts of returning to Ethiopia. I felt they did not want me here.”

The boy who came to Israel with dreams of studying physics and becoming an astronaut, found himself living in a small apartment in Be’er Sheva, hurt, bored, helpless. “I realized I was stuck, that I could not go to school the way I wanted to. I had a harder time than I could tell you, but I also decided to change my life and make it what I wanted it to be.”

How did you do this?

“I realized I could not study in an academic institution nor work, but I have one important thing – time – and I decided that I would use this time to learn all sorts of things on my own. I started learning programming from YouTube. It’s easy: you just need desire and time. My English was not perfect, so I watched every video six, seven, ten, 20 times until I understood everything. It does not matter what you know and what not: if you have time and you want it enough, in the end you will succeed. My friends thought I was missing out on a lot of things. They couldn’t understand why I’d sit all day in front of the computer and so they tried to find me a physical job for 20 shekels an hour. But I wanted to get to higher places. So, in those years, I built my life.”

In 2014, he received the status of a new immigrant and immediately enrolled in computer engineering studies at college. He managed to solve the problem of funding with the help of scholarships, but the problem of language was more difficult to overcome. “I did not know Hebrew, but I thought my knowledge of mathematics would be enough, and it was not enough. I knew mathematics, I knew how to write code, but I did not understand Hebrew. When I missed something small in Hebrew, I got a zero in the test. It broke me, “That can stop you. There are difficulties you can get stuck in, but there is always a way.” I realized I had to learn Hebrew so that I could progress, so I decided to do it through the army. ”

I fought to be successful

Arega enlisted in April 2015 and was sent to study Hebrew at the Alon base, where he was surrounded by new immigrants from all over the world. We were taught history and Zionism, lots of things I did not know. Many of us were lone soldiers, and we became a kind of family. I liked the feeling that I was part of something.”

After several months at the base, he asked his commanders to send him to the prestigious programming course but was denied because it was a pre-military course. “At the end I was told that it was not possible to send me to a programming course, but I could go to a special army center in Ramat Gan and take a course in network management. I said, why not?”. He graduated with honors. “Suddenly I was appreciated, I felt accepted. After I finished the course, I came to the commanders and said I wanted to be a programmer. They decided to give me a chance and assigned me some tasks. I did that, and little by little, people started noticing me. In the end I was sent to a programming course. Apparently, I needed to give more than one hundred-percent to get where I wanted to go.”

At the recent Independence Day he reached high – a ceremony for outstanding soldiers at the President’s House – and was proud of it. “I felt like I did all this, all this way, myself,” he says. “Since then, I’ve been smiling for no reason, all day. Everything has changed in a few years, and I cannot say I expected it. I fought to succeed, and now I know I can achieve anything I want.”

During the ceremony, a surprise was awaiting him, which was covered in the media and aroused great excitement. “They told me to enter a room, and when I entered, I did not see any of the soldiers who were with me at the ceremony. I thought there was a mistake here and I wanted to leave, but they did not let me. Suddenly I see my father get up from a chair. I have not seen him since I arrived in Israel. “That really is him, here, at the President’s house. It took me a while to realize that he is. I do not remember anything about what happened next. It was amazing.”

After the ceremony, the father and son went on a trip around Israel, which became a kind of victory campaign. “Everywhere we went we were met by TV cameras. We go into a restaurant, I order the cheapest dish – and suddenly a lot of dishes come to the table. I ask what’s going on here, and the owner says it’s on the house, that he is happy to see us together. To this day people who meet me remember seeing us on TV.”

After graduating from the IDF, Arega will most likely join the Israeli high-tech industry and earn money on a scale he never dared dream of.  [Update: Since this article was published, Arega joined Seed-X as a DevOps engineer!]. “My story motivates me to continue,” he says. “True, it’s high-tech, and it’s money, but I do it because I love the field. I am happy with my achievements, but happier doing what I love.”

You received many offers from hi-tech companies – why did you choose Seed-X?

There are two reasons why I decided to join Seed-X. The first one is to do with personal development. Being the first DevOps engineer to join the company means I will face all the interesting and challenging problems. This is an amazing opportunity to develop my professional skills. Plus, the people I’m working with at Seed-X are very skilled, friendly, and eager to help with anything since my first interview.

The second part is being able to make a difference. The problem Seed-X is trying to solve is going to have a real impact on the world, from simple farmers to massive companies working directly or indirectly with the seed/food industry. From the first moment, I felt I’d found the next meaningful and challenging project for me to work on.

Sarel Ashkenazy, Seed-X’s CEO adds: “We wanted Hanoch to be a part of growing team because of his skills and his ability to learn fast and work autonomously. In Seed-X, our goal is to make sure every employee fulfills their dream.”

Tell us what does a DevOps engineer at Seed-X get up to?

In a nutshell, my focus is on increasing our ability to deliver applications and services to the market at high velocity, as well as continuously improving our seed analysis technologies and products at a fast pace.

One of my core projects is automation of our GeNee™ Sorter. Automation has enables us to bring the machine from prototype to fully operational in no time, without errors. By automating manual and repetitive tasks, we can focus our resources on developing and improving our software and algorithms faster and reliably, which is having a big impact on dramatically reducing our time to market while increasing productivity.

Where does security fit in?

In DevOps, another key responsibility is keeping our systems and apps secure, providing easy access to authorized users, while making it super difficult for others to get access without permission.

What about new releases?

Lastly, as a DevOps engineers at Seed-X, my job is to accelerate time from development to production. This involves building a software pipeline (including testing) to ensure our customers get the latest releases and new features as quickly as possible – bug free!