When it comes to upgrading lots of tomato seeds, existing practices fall short. Processes are long, cumbersome and in many cases inefficient. This means seed germination rates often fail to meet the minimum germination gold-standard of 90%, resulting in lot disqualification that translates into economic loss and faulty seed delivery.

Already in the first runs of Seed-X brand new AI-powered GeNee™ Sorter, we have achieved an unprecedented combination of high performance (upgrading unsellable to sellable lots with low wastage), with a new level of operational efficiency.

In previous trials, Seed-X has demonstrated the analytical properties and power of its algorithm, when trained to classify seeds by germination. Here, we close the loop by demonstrating the end-to-end process, with the algorithm being fully integrated into a mechanical seed sorter, that culminates into division of the seed lot to a sellable seed fraction and a wasted fraction of inferior germination.

Seed sorting by germination quality was performed by the AI-powered GeNee™ Sorter according to the following process:

Not only did all six sorting attempts result in significant enrichment of germinability and usability rates, but this was also achieved with minimal loss of the usable seeds (Table 2), translating to poor germination performances in the waste fractions (Table 1, Figure 1).

GeNee™ Sorter raised lot quality across a broad baseline of germinability and usability ranges with no bias towards an initial performance (Table 3).

Lastly, as an important side note, Lot 4 was sorted using the classifier of Lot 3, demonstrating how accumulated data from one sorting to the next may be utilized to classify new lots without ad hoc training (Table 1, Figure 1).

Table 1 – Sorting of six different tomato seed lots for germination.
Weight, germinability and usability performances are given for the raw material
(baseline performance) and for the sorted fraction and waste.
* Lot 4 was sorted by Lot 3 classifier. 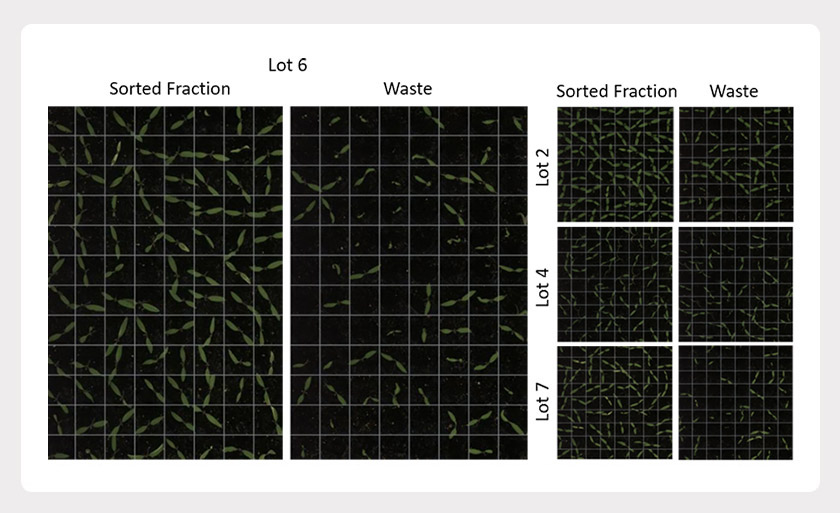 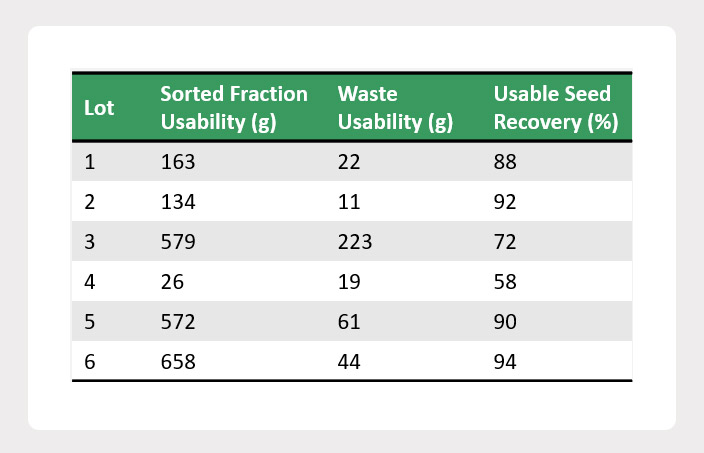 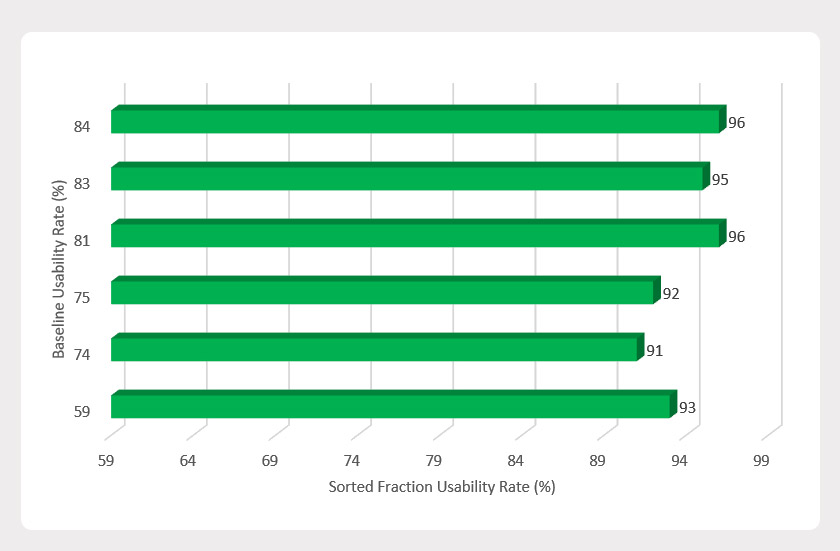 Seed-X technology classifies seeds by their germination fate through intricate AI-driven decision-making that weighs multiple image data parameters at once, seed-by-seed. This means each seed is classified based on its multivariate particularities in contrast to conventional separation methods where all seeds are indiscriminately segregated by individual parameters and fixed gating (e.g., gravity tables or sifter machines segregate seeds by defined weight or size, respectively).

Mounted on the GeNeeTM sorter, Seed-X technology enables the sorting of seed lots by germination fate in an unprecedented manner, with higher accuracy, leading to higher germination rates and lower seed losses, making unsellable lots failing conventional separation attempts – sellable. Not only does Seed-X technology bring germination enrichment to a new level of excellence, but it also reduces the operational complexity of the enrichment process through a converged sorting event delivered by a single machine – the GeNeeTM Sorter.

Germinability, usability and waste levels may be easily modulated to provide a sorted fraction that meets seed company quantity and quality demands. And, finally, data accumulation is expected at first to minimize and next replace ad hoc classifier training, by utilizing classifiers trained with available data to sort new lots of given or related seed lines.

Seed-X GeNee™ Sorter delivers a composite of higher success rates and higher efficiency, proving successful in converting unsellable lots into sellable ones in one converged sorting event, offering seed producers the promise of increased revenues and lower opex and capex.

Want to check Seed-X AI-driven seed sorting abilities on your own seeds?
Contact info@seed-x.com to arrange a demo run on the GeNee™ Sorter.